How Can I Recycle Glass?

Glass may start as sand (among other things), but once made, turning it into something else isn’t always so easy or so obvious. And while it should be easy and obvious that we can and should recycle glass products, it’s not always that easy for consumers like you and me.

And while many of us regularly recycle plastic, and maybe even paper, glass recycling programs are less common. For one, the images of what plastic can do in the environment around us are ubiquitous; we’ve all read about the miles of plastic floating in the ocean and have seen images that show how plastic can harm animals.

Such campaigns are rare when it comes to glass recycling.

And that’s a shame, because glass can be just as harmful and have just as many environmental consequences if not properly recycled. For starters, sourcing the four components from which glass is made (sand, soda ash, limestone, color additives) can cause great land degradation, courtesy the quarries usually needed for extraction. In addition to the environmental land degradation of these quarries, the extraction process often requires a great deal of energy.

Additionally, because silica—a major component of sand, and thus of glass—is one of the most stable elements on earth, glass doesn’t break down quickly when sitting in landfills. In fact, even exposed to high temperatures glass may only weaken slightly or break, rather than truly breaking down. It can take a million (!) years for a piece of glass to deteriorate, so the consequences of not recycling glass—or irresponsible recycling of glass—can be truly tragic.

As a result, recycling is a way to greatly reduce the environmental impact of glass. And, unlike plastic, glass is truly 100% recyclable and doesn’t have to be downcycled.

It needs to be done, right, however; so let’s look at how glass should be recycled. 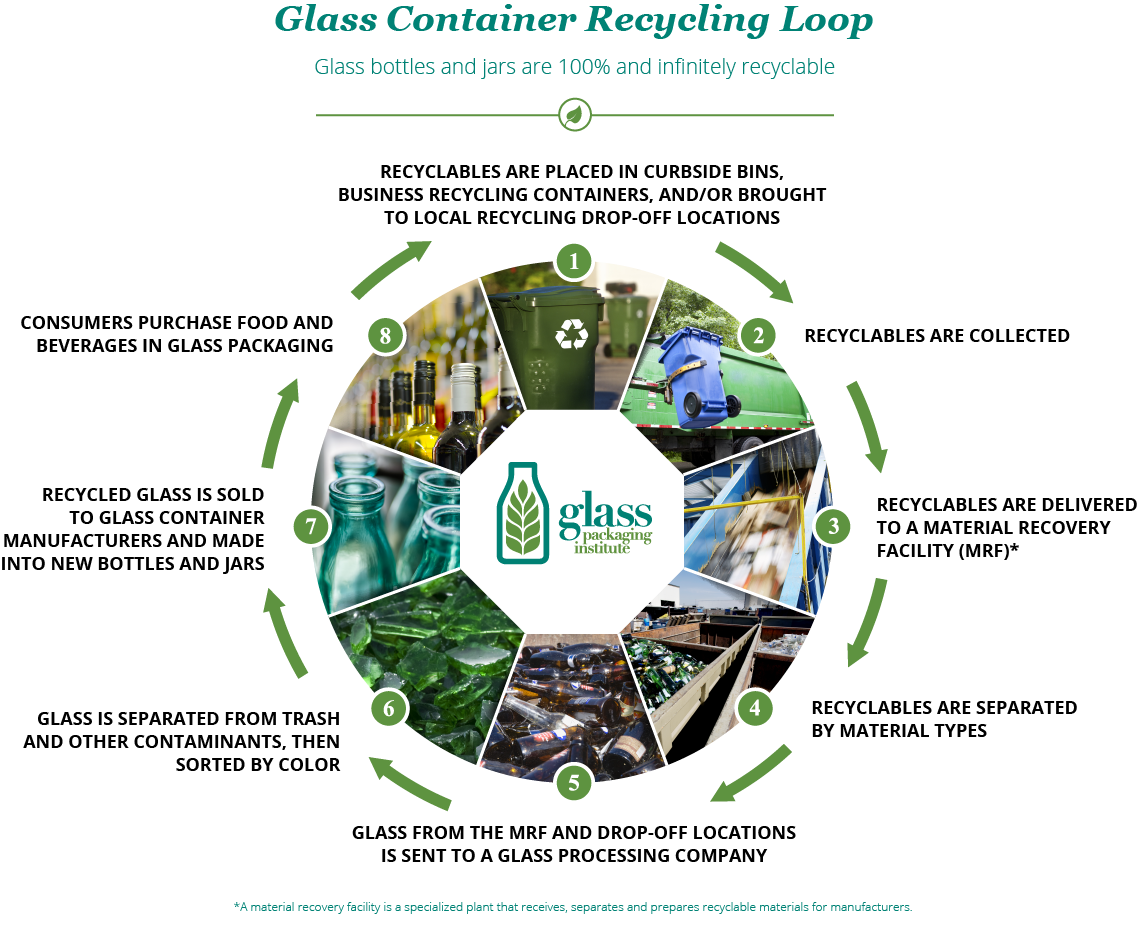 How Is Glass Recycled

To make new glass, glass container makers almost always use what is called cullet—a granular material made by crushing bottles and jars usually collected from glass recycling programs—mixed with sand, limestone, and other raw materials to produce the molten glass needed to manufacture new glass containers.

Using cullet is better for manufacturers and consumers (because it is cheaper) and better for the environment. Every pound of cullet used can replace 1.2 pounds of raw materials, meaning using recycled glass in making new glass can drastically cut down on the environmental impact. Similarly, cullet helps save on manufacturing energy costs, as every 10% of cullet used in the glassmaking feed mixture reduces the energy needed to keep the furnace warm enough for production of molten glass by 3%; because running the furnace at lower temperatures not only uses less energy but also extends furnace lives and reduces operating costs, it consequently also reduces the price of the final glass products.

Cullet has other benefits, too. Cullet improves the quality of the final glass products as it mixes better in the glassmaking feed, doesn’t release gases that can result in imperfections in the glass, and limits the likelihood of unmelted crystals in the glass.

It also helps cut down on greenhouse gas emissions; for every 6 metric tons of cullet used in manufacturing, glassmakers produce 1 metric ton less CO2 emissions because fewer raw materials need to be used. In particular, when carbonates from limestone mix with other materials, they release CO2. This is less of an issue when using cullet, however, because those materials have already been mixed when the now-recycled glass was first made.

And most Americans overwhelmingly support glass recycling. Yet as the percentage of glass recycled in parts of Europe has in the past 25 years doubled or even tripled, glass recyling rates in the United States have barely changed in that time.

That remains the central problem for glassmakers: There simply isn’t enough recycled glass. As a result, glassmakers can’t always get good cullet.

This is because of how glass recycling works in most American communities (if glass recycling is offered at all, that is). Most US municipalities manage residential recycling primarily via single-stream curbside collection. This means that all recyclable materials are comingled in one bin.

The problem with this, of course, is that lots of people throw things in the bin that don’t belong in there, something sometimes referred to as “wish-cycling.” For instance, think of the disposal single-serve coffee-brewing cups. Because people think the plastic cup and foil lid are recyclable, they toss the whole thing (dirty filter and wet coffee grounds included) into the recycling bin.

The problem is, that filter and grounds contaminate the recyclable materials in the bin. While some recycling centers will sort through the materials collected curbside, it can be costly (combining both manual and automated steps) and inefficient. As a result, only 40% of glass collected via single-stream recycling programs ends up being recycled into new glass products.

Another issue in some places is one of distance. Because the United States is a large country, some municipalities in rural or remote areas may not decide it is even worth offering glass recycling because of the cost of transporting the glass, which can be heavy (and thus costly), to a processing facility. As a result, quite a few single-stream recycling facilities either don’t accept glass or simply don’t actually recycle that glass, because the cost of transporting the glass to a processing facility is greater than they are willing to bear.

As a result, if you live in a remote or rural community and want your glass to become cullet, you may be best off finding a glass-only collection site. 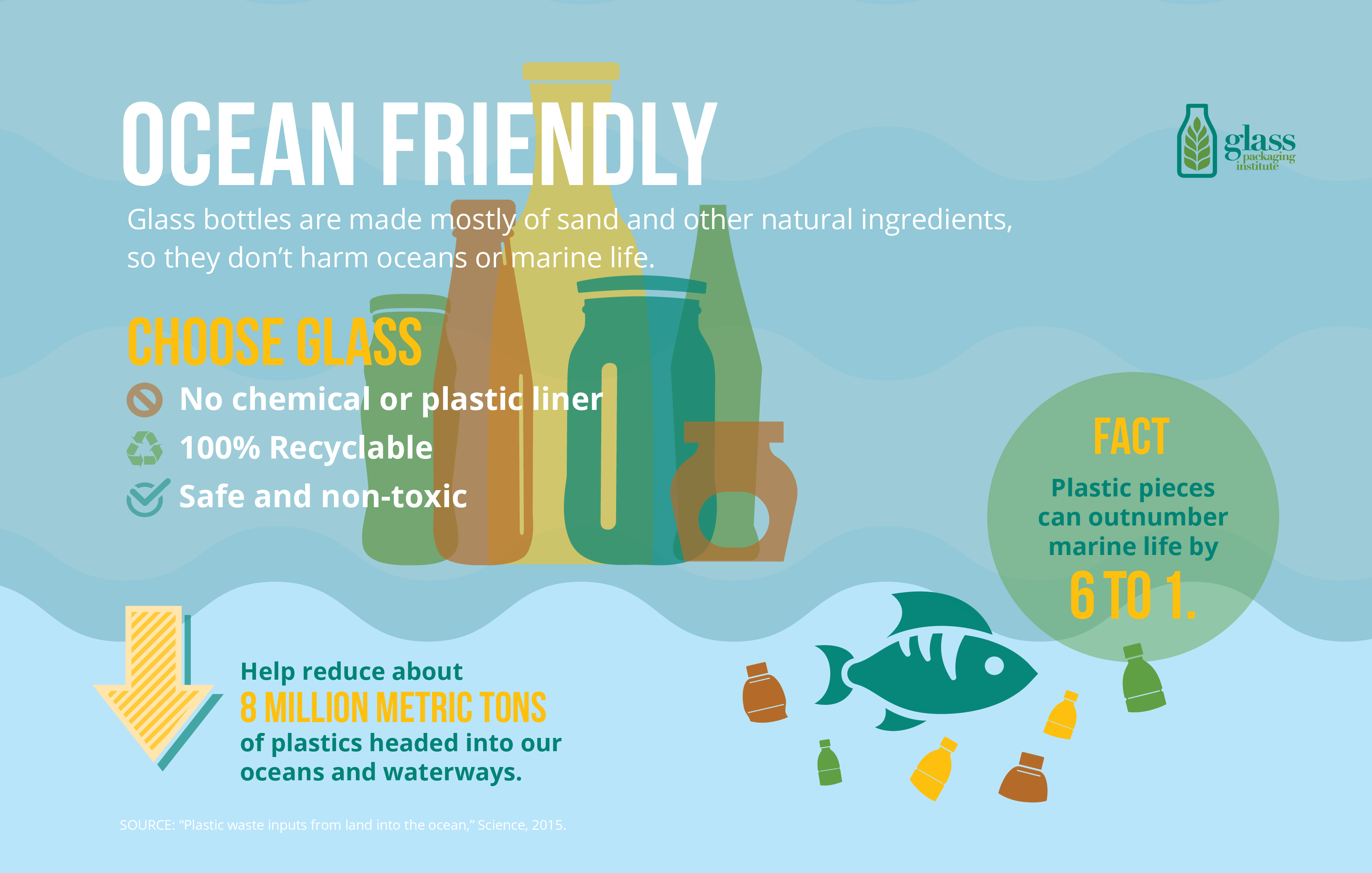 Glass Recycling Near Me

More often as not, successful glass recycling programs have been state or local affairs. For example, 10 states have passed bottle bills that require consumers to pay deposits on beverage bottles, with the aim of encouraging users to recycle bottles in order to get their deposits back. In states with those laws, 98% of bottles are recycled, compared to the national average of roughly 33%.

Additionally, some communities have started their own glass recycling collection sites. Boulevard Brewing in Kansas City, Missouri, for instance, realized that most of their bottles weren’t being recycled because there was no local cullet processor—so they launched one, Ripple Glass. Ripple placed 60 glass-only collection sites across the area and soon saw an influx of clean, high-quality recyclable glass from which they were able to make cullet.

Still, more work is needed, whether that’s increasing landfill rates (which partially drives recycling rates in Europe) or mandating recycling (also the case in many European countries) or further local strategies such as that undertaken by Boulevard/Ripple.

Until then, though, one of the best ways to find glass recycling near me is via Recycle Now’s search function.

Where Can I Recycle Glass Bottles For Money Near Me

A few things to keep in mind: First, the bottles have to be clean. Second, each state’s laws on what is returnable may vary. In general, though, food and dairy jars are not bottles for which you will get a deposit back; other beverage jars (beer, soda, wine, etc) will.

Look up the laws in your area for more information.

Products Made From Recycled Glass

Whether or not you can get money back when recycling glass, it’s something you should seriously consider. Not only does cullet help save the environment in all the ways we discussed previously, but nearly any glass product can be made using cullet.

If you ever use anything made of glass, ask yourself this: Would I feel better about this product if I knew it were made with recycled glass?

But glass recyclables can become so many other things, too. Construction materials such as concrete, brick, and even tiles, often use cullet as a binder. Fiberglass, too, often uses cullet of varying sizes to produce desired resistance to heat transfer.

Cullet can also be used to give paint a texture or as a filtering agent for pool filtration. And this is just a sampling of the ways cullet can be used. So when the alternative is potentially taking a million years to break down, why aren’t we all recycling our glass?

What Happens if Glass Is Not Recycled?

Conversely, if that doesn’t help convince you to recycle glass, consider how much glass is currently in landfills. A 2009 Keeping America Beautiful study, for instance, found that Americans threw away over 9 million tons of glass. A 2007 Cask report found that 75% of Canadian glass ended up in landfills. Regardless of which side of the border you consider, that’s an awful lot of glass—all of which may take a million years or more to break down.

The US currently only recycles about 33% of glass, compared to the 90% recycling rate in many European countries. That currently means 10 million metric tons of glass are thrown away each year, and even the glass that is recycled often does not make it to a processing facility; only 40% of single-stream glass recycling becomes cullet.

Fortunately, we can do better. Find local glass recycling collection sites and that percentage rises dramatically: Up to 90% of glass collected and which is not comingled with other recyclables ends up in new glass products.

Ask yourself what you can do to help promote glass recycling in your area and you just may be shocked at the results!

Want to learn more recycling tips or get information on how you and your family can live a more eco-friendly life? Then check the following pages on recycling: