Despite being one of the easiest materials to recycle, aluminum cans are all too often thrown away. In fact, according to statistics from the Environmental Protection Agency, barely more than half of all cans sold in the United States end up getting recycled. That’s a real bummer, too, as not only does recycling aluminum save landfill space, but it also reduces carbon dioxide emissions and the considerable amount of energy required to make it.

In fact, until the 20th century—when chemist Charles Michael Hall invented a cheaper way of refining bauxite into aluminum—aluminum was considered incredibly rare and expensive, so much so in fact that the Washington Monument was given an aluminum tip in 1886 to demonstrate its importance and value. Despite Hall’s method, however, aluminum creation still requires a tremendous amount of energy. In fact, the amount of energy saved by recycling even a single can is enough to power a television for three hours! That is simply one of the many reasons why Our Happy Planet believes everyone should have aluminum can recycling information and tips about recycling aluminum cans so as a global community people can start living a more sustainable lifestyle.

But if that isn’t reason enough to consider recycling aluminum cans, however, check out these 10 interesting facts about aluminum can recycling. 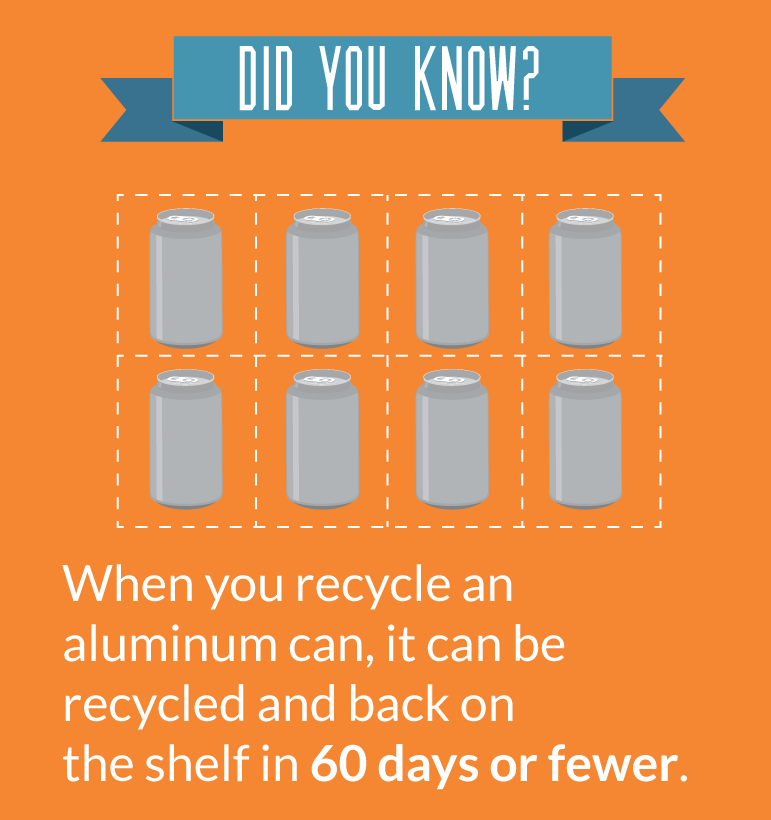 How to Recycle Aluminum Cans

When it comes to aluminum can recycling, it really couldn’t be much easier. Not only do many municipalities offer curbside pick-up, but because aluminum recycling is one of the most valuable forms of scrap that recycling centers might deal with, it’s rare that a recycling center won’t accept aluminum.

Let’s look at each of your options for aluminum can recycling:

Depending on where you live, one, two, or all three of those options may apply for you and your aluminum cans. A few steps will apply no matter which of three options you choose, though, so let’s talk about those steps first.

Start by rinsing your aluminum cans out before setting them aside wherever you store your recyclables. For most cans, simply rinsing the cans a few times with hot water will be enough to remove any residue; for sticky or otherwise extraordinarily messy cans, however, you may need to let them soak full of hot water. Cleaning your cans in this way to remove any residue helps eliminate odors, which in turn lessens the likelihood of bugs or other pests showing up in your recycling.

While you no longer are required to crush your aluminum cans before recycling, it can still be a good idea if it helps you save space in your recycling area. And about that recycling area: You should have designated space for your aluminum cans so that when it’s time to put them out for curbside collection, take them to a recycling center, or drop them off for a local school or charity fundraiser, you can do so in an organized manner. If you have a designated recycling container provided by your municipality, great, but if not, it’s easy enough to set aside a large plastic tote, for instance.

A few other things to consider: If you live in one of the 10 states with a bottle bill, you can take your aluminum cans to a recycling center for cash—generally 5-10 cents per can. That can add up quickly! Those 10 states with bottle bills are California, Connecticut, Hawaii, Iowa, Maine, Massachusetts, Michigan, New York, Oregon, and Vermont. Just make sure that if this is an option in which you are interested that you do your homework; each state may have their own restrictions. And if you live in a different country, check your local rules and programs—there may still be a way to recycle your aluminum for cash.

Finally, a word of caution: Use caution when sorting through and cleaning your aluminum cans, as the rough edges can easily cut your skin.

Lastly, we recommend using Earth911’s Recycling Locator to find an aluminum can recycling location near you.

Should Aluminum Cans Be Crushed Before Recycling?

It used to be that aluminum cans needed to be crushed before they could be recycled. That’s no longer the case. However, you may still wish to crush your aluminum cans for simple space considerations.

Especially if you are recycling larger quantities of aluminum cans, those cans can take up a significant amount of space rather quickly. Beyond that, though, it can actually get a little more complicated, and depend on how you are recycling your cans.

For multiple-stream recycling, for instance, where everything is already separated, crushed cans can help save space and consequently make transporting recyclable materials more efficient. For single-stream recycling, however, where recyclables are separated at a Materials Recovery Facility, aluminum cans should not be crushed—because it’s easier for the sorting machinery to sort out intact cans.

In general, though, it’s far more important that you are recycling aluminum cans than whether or not you are crushing those aluminum cans—especially as 40 million cans end up in landfills each year.

What Aluminum Can Be Recycled?

For instance, many curbside recycling programs will accept most household aluminum beverage and food products provided they are clean, including aluminum cans, aluminum foil, aluminum baking trays, and even aluminum pie pans.

Industries that use aluminum may have their own programs. For instance, construction contractors frequently use aluminum, whether in siding, gutters, or cables; contractors may have their own recycling programs if working on a large enough scale, or they may work with scrap yards that take their aluminum. Similarly, many automotive parts are collected for recycling when they are replaced; individual shops may have their own recycling programs (if they’re part of a larger network of shops, for instance) or they may work with scrap yards. In fact, more than 90 percent of aluminum used in building and automotive industries are recycled at the end of their use, serving as feedstock that is then melted down by aluminum recyclers to then be used in the secondary production process.

Why Is Aluminum So Easily Recycled?

As a result, nearly a third of all aluminum used in the United States is derived from recycled materials. Not only is aluminum the most abundant metal on earth, but an average of more than 100,000 aluminum cans are recycled every single minute.

10 Tips for Aluminum Can Recycling

Can Aluminum Be Recycled Indefinitely?

Eventually, the aluminum needs to be mixed with higher-grade aluminum or bits of fresh aluminum in the recycling process, but the truth is that aluminum really can be recycled indefinitely. And roughly a third of all aluminum out there in use today is recycled aluminum; in some industries (such as construction and automotive, for instance) up to 90% of all aluminum gets recycled.

Even better, aluminum cans can quite readily be recycled for money. If you live in a bottle bill state— California, Connecticut, Hawaii, Iowa, Maine, Massachusetts, Michigan, New York, Oregon, and Vermont—you can pretty easily return aluminum cans for the deposit of 5-10 cents each. Even if you don’t live in a bottle bill state, scrap yards may be willing to buy your aluminum from you. As a result, its often well worth making a few phone calls to determine what forms of aluminum your local scrap yards accept and what rates they pay, as well as for how long they are willing to honor that rate.

How Much Are Aluminum Cans Worth?

In bottle bill states, it can be easy to determine exactly what each can is worth. All you need to do is look up what the deposit is in that state, and voila, you know exactly how much your aluminum cans are worth, whether that’s 5 or 10 cents each.

In other places, however, it depends on your local scrap yards and the rates they offer. Additionally, most scrap yards pay by the pound, so you’ll need to know how much your cans weigh (depending on the cans, it may be anywhere between 20-40 cans per pound; newer cans are generally lighter than older cans) or simply regularly weigh your aluminum recycling container, remembering to tare out the weight of the container itself.

How Much Is a Pound of Aluminum Cans Worth?

That depends; older cans are heavier than newer cans, which can make a difference in bottle bill states. In 1972, for instance, it took roughly 22 empty aluminum cans to weigh one pound; in 2002, it took 34 empties to add up to a pound. Newer cans may be lighter yet; for argument’s sake, though, let’s assume that even with the lightest aluminum cans, 40 empties will make a pound of cans.

As a result, if you live in a bottle bill state you could make as much as $4.00 per pound (40 aluminum cans at 10 cents per can) and can generally count on at least a dollar or two per pound. If you don’t live in a bottle bill state or near enough to reasonably drive to one, however, you can still sell aluminum cans to scrap yards. Most scrap yards are currently offering between 40 and 50 cents per pound of aluminum, which can still add up over time.

Where Can I Take My Aluminum Cans for Cash?

If you live in a bottle bill state, you should readily be able to find a collection center; taking your aluminum cans to a location where they’ll give you cash deposit back on those cans is definitely the best way to make money on aluminum can recycling.

Where Can I Aluminum Can Recycle Near Me?

There are plenty of apps and search functions out there that can help you find the best prices near you for aluminum can recycling. One of our favorites is the iScrap app.